Pongpisit Huyakorn of Urban Studies Lab talks about the Nang Loeng neighbourhood, its community, and the Social Innovation Hackathon: Creative Placemaking for Nang Loeng. This is the first article in a series to be published over summer 2021. 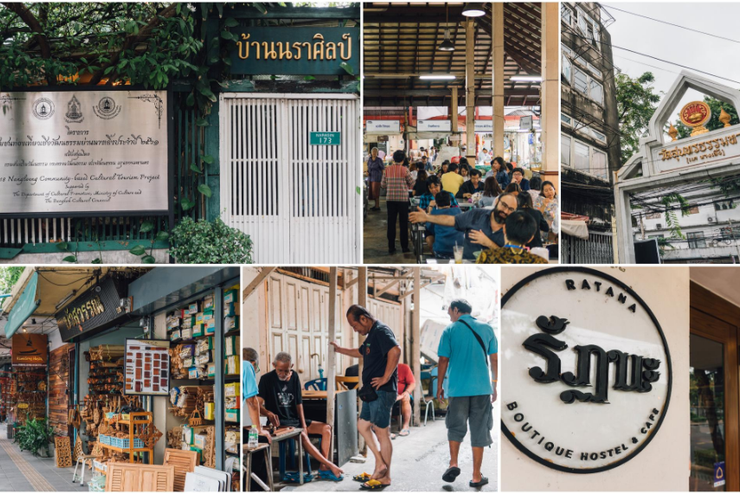 Pongpisit HUYAKORN (Pun), Director of Urban Studies Lab in Bangkok talks about the Nang Loeng neighbourhood, its community, and the Social Innovation Hackathon: Creative Placemaking for Nang Loeng . The Hackathon was a joint project between the British Council, the Ford Resource and Engagement Centre and Urban Studies Lab, which started in early 2020. It aimed to engage creative hubs from Thailand and the UK, with the Nang Loeng community, to design and deliver social innovation projects for the neighbourhood. This is the first article in a series which will feature also the winning hub team, as well as other projects that emerged from the hackathon.

Nang Loeng neighbourhood is one of the richest area in Bangkok in terms of heritage and socio-cultural life. Nang Loeng is a well-known entertainment district that hosts a food market, Thai drama and theatre, and dance troupes to name just the few. The history of the area can be traced back to King Rama V era. Back then, the majority of the local communities were from Thai-Chinese roots and southern Thais. We can still experience the culture which have been passed down through generation in the local cuisine and festivals.

Today, Nang Loeng is at the crossroad. The area is located in between the old town and the new CBD [Central Bangkok District]. The spillover development from both sides is growing. Shophouses are being abandoned or gentrified into newer hospitality businesses, and with no secondary schools, nor attractive higher education institutes in the area, less and less younger generations remain to sustain heritage businesses. Many local leaders are spearheading the movement for taking care of their communities, but with limited resources or a new generation to support them. Interestingly, one of the abandoned high school building was converted into a centre for local communities and a hub for NGOs. 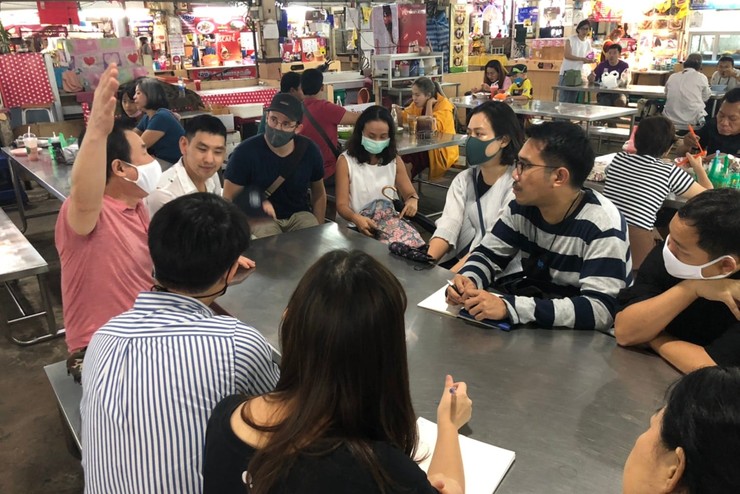 The new community centre was established in 2018 as the Ford Resource and Engagement Centre (FREC). As the flagship programme of Ford Motor Company Fund, FREC is a hub for social impact and environmental NGOs. With a proven model in western countries, FREC Bangkok is trying to implement this model for the first time in Asia. Two years after its founding, the centre functions as a community centre which has an ongoing relationship with the neighbourhood, running after-school programmes, a community kitchen, skills trainings, and lecture series. Partners, known as Stewards, include Scholars of Sustenance (SOS), a food rescue NGO, Nature Inc., a co-working space and incubator for environmental NGOs, as well as Precious Plastic, an organization focused on plastic upcycling and awareness raising on sustainable consumption of plastic material. USL is also one of FREC’s founding Stewards.

Urban Studies Lab (USL) was selected by British Council to be the main facilitator for the Social Innovation Hackathon: Creative Placemaking in Nang Leong, with the aim to connect creative hubs from Thailand and the UK, to offer innovative social impact solutions for the Nang Loeng neighbourhood. USL is an independent research centre that focuses on building inclusive urban neighbourhood development processes through partnership with leading Thai universities and other partners in the public, private and NGO sectors. At Urban Studies Lab, social impact is at the core.

"Our main mission is to conduct collaborative urban research and bridge that research into actions and projects that make real impact in the lives of local community residents. The Nang Loeng neighbourhood is fundamental to USL’s mission: it’s both our home and the location of our most impactful projects, which range from a pocket park revitalization, the COVID Relief Bangkok initiative, a community engagement app, and several other public space improvement activities. " 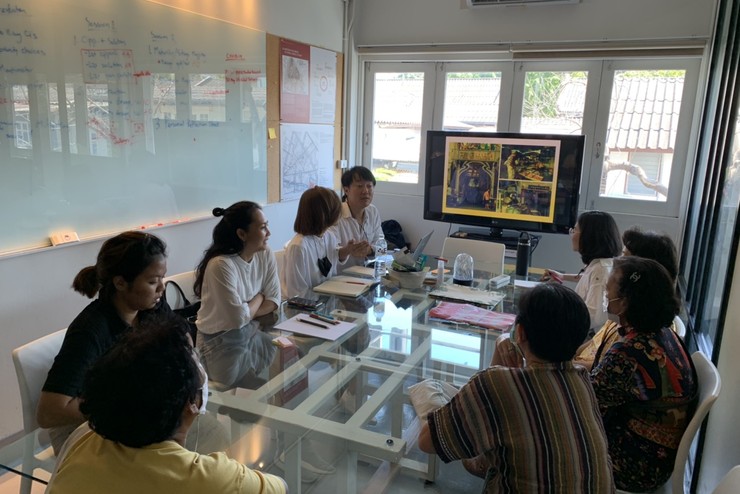 USL acted as the facilitator of the activities, working with British Council to develop the process to encourage participants to build upon the rich socio-cultural heritage in the neighbourhood, and most importantly, supplement ongoing work that local communities have already been doing to improve their neighbourhood. To facilitate this last point, the hubs participants were given access to the FREC baseline and community engagement report that was conducted by the USL research team, which they produced by working with more than 100 local participants from various backgrounds. They also reviewed the USL project bank covering data and information from its university network design studios and research of the area. This helped ensure that the participants had more comprehensive understanding of the challenges facing the area, as well as knowledge of some of the alternative solutions that had been developed or implemented. Following this introduction to the neighbourhood, participants then needed to submit a preliminary project proposal prior to the launch of the three-day Hackathon. 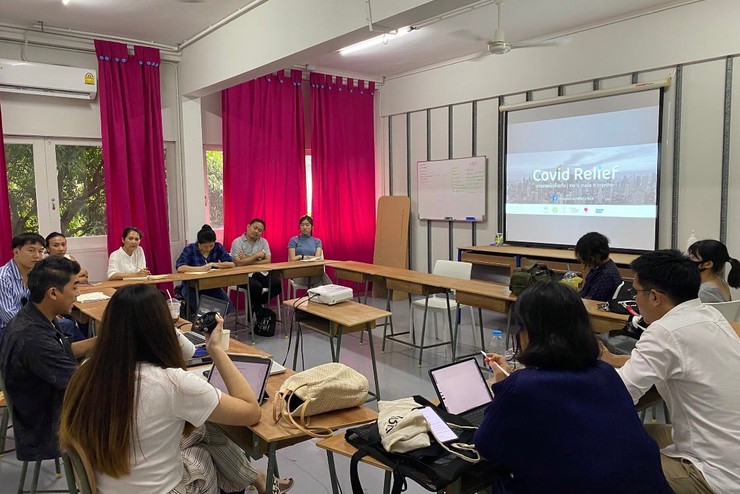 From the beginning, engagement with the local stakeholders was at the core of the process. Hackathon participants talked with market communities, the district office, schools, local leaders who are promoting the arts & crafts of the area, new generation business owners and FREC partners. They explored the neighbourhood with USL and local communities, giving them the chance to test out their initial project hypotheses. This process helped validate the solutions they had in mind while gathering crucial first-hand input. USL also supported the teams with a Social Impact Assessment toolkit and training on how to use it. Participants were matched with UK hubs based on a correlation between their projects and the UK participants’ areas of expertise.

At this point in the project the COVID-19 pandemic hit. The sudden spread of the virus and following lockdowns forced the project team to change its original timeline and delay other in-person activities planned for the Hackathon. Teams were encouraged to take longer to reflect on their proposals, and collaboration with UK partners was facilitated through online platforms for nearly 3 months. Though COVID-19 has not been good for anyone, in some ways, this drawn-out process ended up providing some benefit to the Hackathon, as the participants were able to spend more time tailoring their solutions to the local context based on what they had learned. 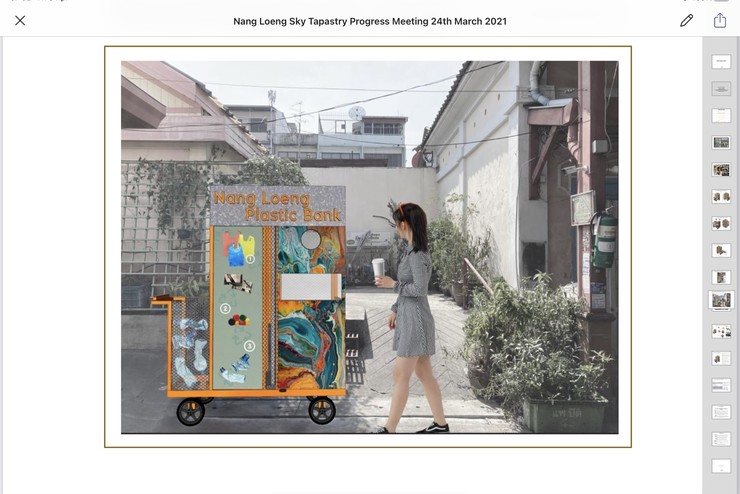 The final week of the Hackathon, and once in-person activities were able to resume, the participants came back to Nang Loeng and paired up with representatives from the local communities to develop their final proposals. Teams were given further support from experienced practitioners in the field such as brand designers, a founder of a social impact organisation, community architects and corporate incubators.

At the end of the week, teams pitched their ideas to a panel of judges, and were graded based on criteria that highlighted the importance of sustainable and long-term development. These criteria included:

Project proposals included a digital platform for local enterprises, a virtual tourism experience and treasure hunt highlighting local heritage and history, development of a local pocket park and community centre, and a plastic upcycling station to build plastic tapestries as shading structures. While there was only one winner, all of the projects had merit to be carried out in the future. 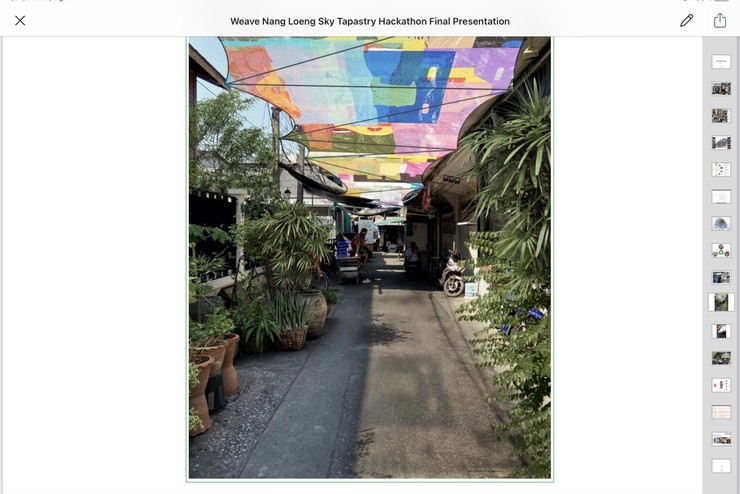 Throughout the process, USL learned how creativity and collaboration leads to innovation and inclusive development. The diversified expertise from varied backgrounds, for example, between the professional mentors and the participants, encouraged a healthy debate as well as an exchange of creative solutions across disciplines.

On the other hand, for any organisation who wants to promote more inclusive development, simply putting relevant stakeholders together is not enough. Information and data sharing, as well as tools to support the process is extremely important. The physical platform for engagement is also crucial. In this case, FREC centre acted as neutral ground in which the local communities feel comfortable using. Having veteran creative hubs who have been operating for social impact from UK also proved to be extremely important and the innovative solutions which came out of the process are the good evidence. The UK hubs also pitched in and formed the longer-term partnership with Thai hubs that may goes beyond this project.

“Now we move on to the harder, but also most fun part: the implementation stage where we put the solutions into action!”, Pun concluded.

Over summer 2021, we will release a couple of follow-up articles from the Hackathon, talking to the winning team, but also to the runner-up team who are also committed to taking their project forward.

We're seeking four creative hub leaders from the UK to connect and collaborate with hub leaders in Thailand in tackling challenges of the Nang Loeng neighbourhood. The event will take place on 16-20 March 2020.