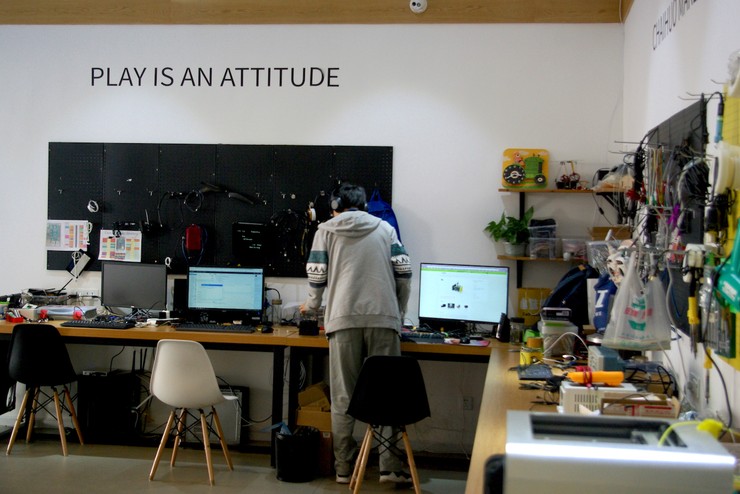 Here are selected extracts from Kat, Jon and Ingrid’s article exploring the impact of government policy on the maker ecosystem.

A series of strategic policy shifts is setting the scene for widespread social change in China - but who is it really affecting?

In China, makerspaces are not just building new things - they are building a new world in their image.

From inventing the abacus, to working with the world’s first hot air balloons (Dinke 2005), China has always experimented with new technologies.

But as we learned from the many creatives, makers and innovators we met on our tour of maker and craft sites in Chengdu and Xi’an - China is experiencing an especially transformative moment in its history, with making as the focus.

The making and innovation policies that lead to the creation of today’s government-supported makerspaces started to emerge around 1988, when the Ministry of Science and Technology launched its first ‘Torch Programme’ to help foster new R&D spaces across the nation such as software parks and science and technology industrial parks

It was not until 2015, however, that a series of strategic government policy shifts toward enabling design thinking and entrepreneurship, typically referred to as mass entrepreneurship and mass innovation, lead to the ‘makerspace’ (or a site for making and learning with digital tools) becoming a central priority, with the aim to transform the next generation of Chinese youth not only into doers but also into entrepreneurial, business-minded innovators, or makers.

This prioritisation does not mean there necessarily is a corresponding amount of demand for such a widespread proliferation of new spaces, however, or that the data matches up with realities.

In our tours of sites across both Chengdu and Xi’an, for example, we encountered many sites that were either completely empty or under-used, despite reportage of very high membership statistics. This is consistent with reports of too much competition between makerspaces and makerspaces that lie empty for most of the day (other than during delegate tours, of course) in other cities like Beijing and Shenzhen. The sites we saw ranged from messy and workshop-style to clean and very, very empty.

Makerspaces that break the mould?

At the Makerfun space in Chengdu, for example, the team is proud to organise workshops that not only focus on incubating new businesses, but also on having fun.

We also discussed interdisciplinary futures with students and staff at maker-related programmes affiliated with universities like the new Southwest Jiaotong University makerspace. We spoke to the founders of Burns Interactive, who are leading the development of a new Art & Technology degree at the Sichuan Conservatory of Music. At the Burns Interactive studio, we saw many creative and innovative projects that linked strong physical making skills and material knowledge together with new technologies.

In Xi’an, meanwhile, we met the first graduating cohort of a new Interactive Arts course at the Xi’an Academy of Art, and saw their presentations of a series of imaginative year-end projects that merged ancient crafts, stories and superstitions with new sensors and technologies. 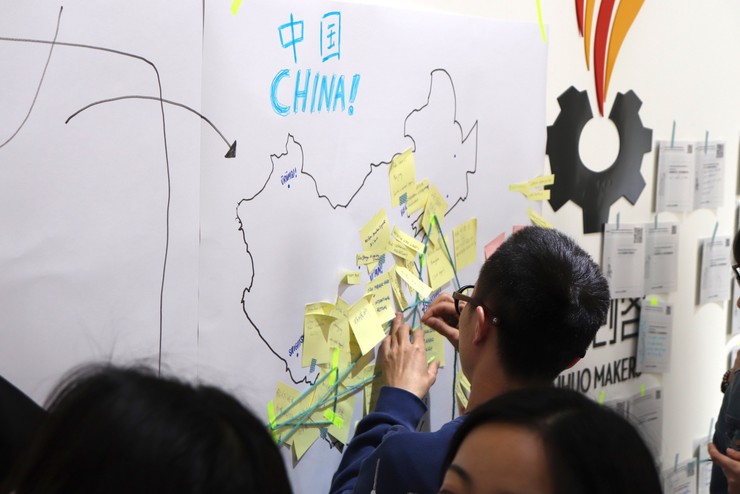 A participant of our network-mapping workshop links makerspaces across China

It may well be the graduates of these new maker-inspired courses that end up occupying China’s 10,000 makerspaces once they feel ready. The ethos of creativity and risk-taking cultivated by their experiments will certainly help foster China’s desired transition from its economic model of ‘Made in China’ to one of ‘Designed in China’. This pathway, however, also requires a new kind of makerspace that is not only a gateway to accessing new technologies, startup culture and an entrepreneurial mindset, but is also an open and truly collaborative hub of creativity — where subversion, remix, exploration and freedom of expression are fostered instead of mere obedience.

He Renke, Dean at Hunan University, has expressed the belief, shared by many we spoke to in the field, that the future of design in China will be “more diverse, more green, more open, more confident, and more global […] and when this happens, the rest of the world will recognize China’s design renaissance”. By learning how to pioneer these qualities, the new generation of makers we met in China may play central roles in the renaissance. Only then can the echelons of empty makerspaces we saw come alive as the centres of grassroots innovation they hope to be.

The Living Research: Making in China programme is a partnership between the British Council and the Arts and Humanities Research Council.

In China, the British Council has partnered with MakerNet to co-develop the project in Chengdu and Xi’an. 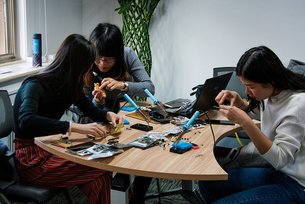 Our delegates started their research trip in the city of Chengdu, the capital of the Sichuan province located in the Southwest of China