Guest blog: Making space for reflection on sustainability and repair

Hello Shenzhen UK host Jake Harries, from Access Space, shares some of the highlights and questions raised from the 3 week residency with a maker from Shenzhen.

It was a great to take part in this residency programme. In early March we welcomed Rachel Hu from Litchee Lab in Shenzhen into our space and the Sheffield maker community.  The three week residency went so fast, we would have been happy for it to be longer. It's difficult to condense three weeks into a few words, but here are some highlights...

Initially, what struck us at Access Space was just how business-orientated making in Shenzhen appears to be from the presentations we saw and the conversation we had with the Chinese makers, and of course the sheer speed with which things happen there was a bit of a revelation. We were also hoping to learn about Litchee Lab and if there was anything we could glean from them, particularly to help our education programme.

This residency, however, was focussed on sustainability and repair culture. Neither of these are strictly defined, so there was some bleeding over the edges as we explored aspects of the subjects, and particularly as we began investigating what is left after recycling/reuse. 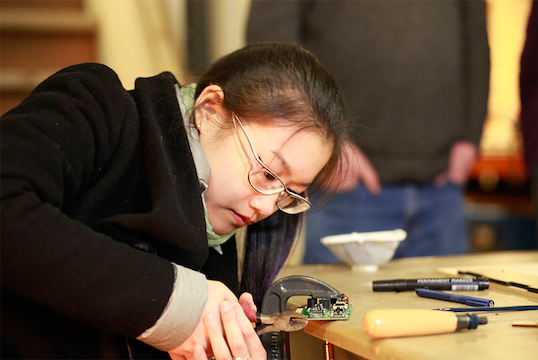 It was fantastic to see so many from the Sheffield making community at Rachel's presentation on 16 March. We wanted as many local people as possible to get a flavour of what making in Shenzhen was about and to ask questions.

During the residency, our overview of Sheffield maker spaces showed that some differ from others enormously. We looked particularly at three spaces in the city, each having a different business model; one based on a small monthly subscription with 24 hour access for members; one which has bought property, rents desk space, has a bar and book shop, a co-op structure and sells community shares; and another which has a range of income sources, but is mostly reliant on grants due to charitable activities.  Each, seemingly, has a different purpose. What makerspaces are for and what happens there, in Sheffield at least, appears down to a large range of factors, not all of which, of course, are to do with business start-up/incubation. When Access Space opened Refab Space in early 2012 we were aware of the amazing possibilities for entrepreneurs to capitalise on this emerging activity, and within just a few weeks of opening a couple of start-ups did just that, both of which have gone on to great success selling products internationally, one of which is Pimoroni, creators of the well-known PiBow case for RaspberryPi. However, we discovered over the coming months and years that a different kind of person used our space the most. Not everyone wants to create a killer product, nor tap into business networks: they simply want to explore the possibilities of the technology for their creative arts practice or their own curiosity, because they enjoy the challenges.

So, freedom to explore and travel between places of inspiration, then, is contrasted with goal orientated, structured, product development, with paths to market. It seems makerspaces may be able to accommodate both, if their facilities allow. 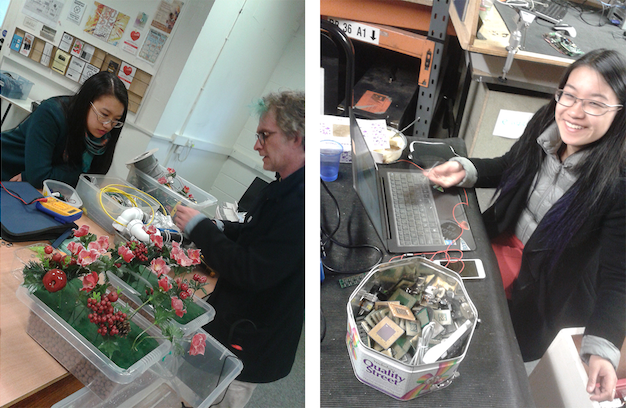 One of the defining moments of this residency was when Rachel was creating a piece of jewellery from a printed circuit board taken from a trash computer. The pendent she was making was being created by hand, painstakingly cut and shaped from the part of the PCB which had the qualities she required for it to look as she wanted.

After it was cut, she said a question raised itself: “What happens to the rest of the circuit board?”

It seemed such a simple question. But if it is true that only so much repair and reuse is possible, what happens then? How much can be recycled, and how is it recycled? How much ends up in landfill and where?

Where there are vast opportunities for selling new products there will be a vast amount of waste to deal with also. Dr Hannah Stewart mentioned in her talk in Edinburgh at the beginning of the residencies that a large percentage of the responsibility for what happens to a product after use is down to decisions made by the designer.

Toward the end of Rachel's residency we asked the question:

If the activity undertaken here was not to make an object or develop a product as such, what could we create in our maker space, with the tools available, which might communicate the nature of the exploration that took place, and perhaps also communicate the new questions which emerged during her time here?

For inspiration we looked to the work of the contemporary British artist, Mark Titchner, who deals with complex subjects in a deceptively simple and direct way.  A photo of what we came up with is below. 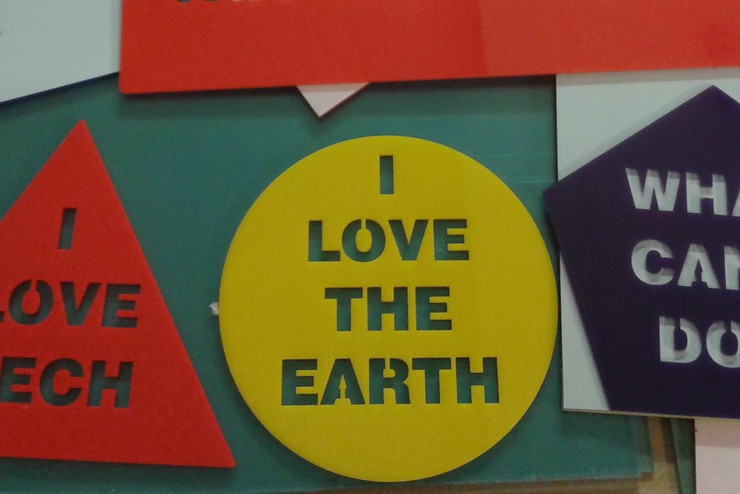 We are staying touch with Rachel. The dialogue is going to continue, we hope, for a long time!

Guest blog: Designed in Shenzhen - an insight into a 3D printing studio in China

Hello Shenzhen participant Laura Elvira, resident at Pineprint, writes about her experience as a guest designer in Shenzhen

Hello Shenzhen UK host Liza Mackenzie from Makerversity, shares the ideas and processes developed during the 3 week residency with two makers from Shenzhen

Last week we announced the UK makers who were selected to travel to residencies in Shenzhen. We are now very excited to reveal the list of the Chinese makers coming to the UK!