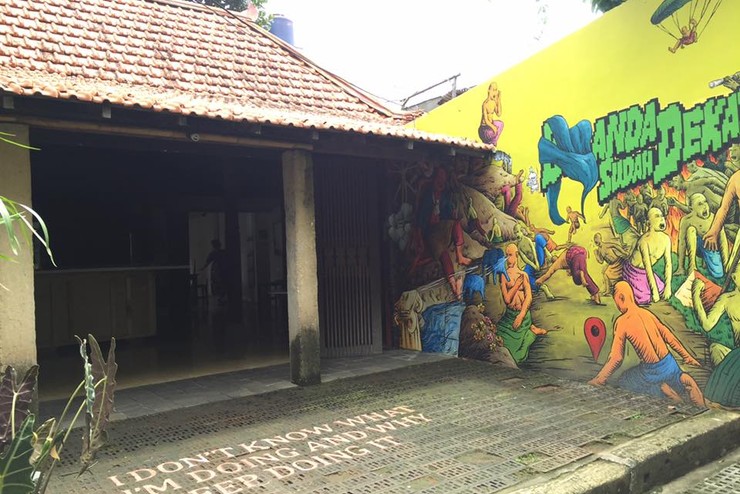 In November, Louise (BOM’s Head of Programme), BOM Fellow Di Wiltshire and I were invited to Indonesia by the British Council to scope a longer-term project encouraging new female-led practice with art and tech.

The trip was genuinely one of the highlight experiences of leading BOM to date. The word ‘inspiring’ isn’t big enough to do it justice. We found brilliant new allies in Lifepatch, a citizen initiative in art, science and tech fronted by a passionate (and über-chilled) collective of makers, techies, artists, producers and DIY science enthusiasts. Pretty incredible that British Council had the foresight to connect us together, because there is such amazing synergy between what we’re doing at BOM, and our Fellows. This is what British Council are good at: spotting connections, matchmaking and free-rein research and development to spark new ideas and relationships. This is an epic proposition in a world with reduced funding cuts and increasingly uncreative, risk-averse ways of working. However, the British Council does work from a clear strategic agenda – in our case, to consider the decrease of female participation in the creative industries in Indonesia, and devise interventions that will help foster more inclusive practices with art and tech, which can open up important conversations that need to be had.

Di has already published a blog on her experience of taking her work Sentiment to Indonesia. She was buzzing with ideas around traditional weaving and the mining of data. We’re looking forward to hearing how her ideas develop. 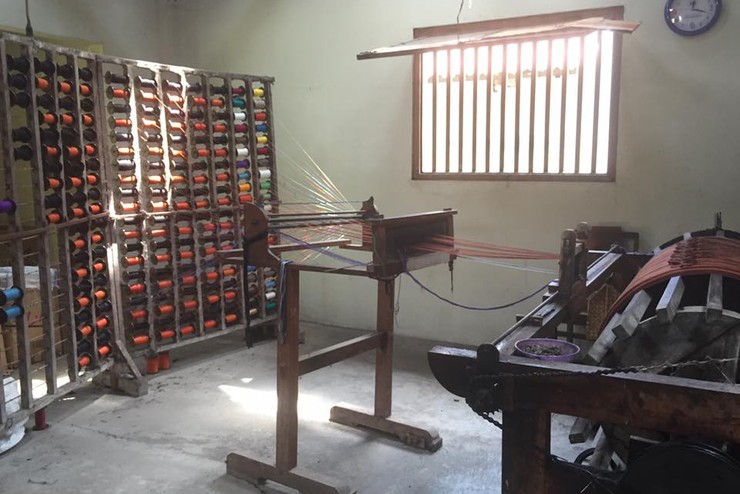 It’s fair to say that our programme is taking a slight feminist turn since Louise joined us from FACT in Liverpool so the Indonesia commission is interesting (Louise and I bounced off each other years ago when I was Curator at FACT, and she was duly stolen). The ripples of our feminist vibes will start to become more visible in future programmes exploring cyberfeminism, engagement with excluded girls and female-led Afrofuturist work. There are endless possibilities to connect these ideas through the programme we’re envisioning with Lifepatch; it’s super exciting.

While we were in Indonesia we met with some incredible activist collectives from HIVOS, an NGO aimed at achieving structural change through equality, to Betina feminist collective and Sparky and Bear homeschool, offering education with creative tech to homeless children. We met a whole spectrum of brilliant practitioners, from Lifepatch who have been working actively with their local community since forming in 2012 (their ‘Nenek’ project, meaning grandmother, engages older women through science and tech); transgender performance artist Tamara Pertamina; the insane crafted worlds of textile artist Mulyana, and planet protector Raja, who is creating low-cost DIY drones to survey Indonesia’s fragile ecology and protect the natural wildlife, in partnership with indigenous communities.

"There is such a lot of brilliant work already being produced in Indonesia against a really challenging socio-political context, which formed the basis of many passionate conversations with artists and activists over beer."

In terms of the impact on BOM, the experience has been immense. And we haven’t even got started yet. The recce fundamentally shifted our ways of thinking about our own ‘hub’ model back in Birmingham. This rethink comes at a point where we’re looking to expand further into our own building through a second phase capital project, and claim new gallery and programmable space at BOM.

So here we are. Three things we learned on our Indonesian adventure, which will be permeating our evolving business model and programmes in all sorts of ways over the next five years…

What do we actually do for our neighbours?

I mean really. Not like “the arts bring abandoned buildings and areas back to life” and “for every £1 of public funding spent…” Who really lives near us, and what do we do for them? Indonesia is unique in that their ‘creative hubs’ are often people’s houses, where collectives of artists and makers congregate. Living rooms become radically open gallery spaces where people drop by for much more than seeing art. Lifepatch take part in a neighbourhood watch programme, going around the area each night to check on local residents. Children run in and out of Lifepatch’s house after school, using the computers and wifi for homework, and learn new arts and electronics skills while they’re there. Women become unassuming biohackers in Lifepatch’s kitchen, learning to make fermented tea and yoghurt. They have keys, and just let themselves in if there’s no-one there, cleaning up after Ucok and Adde if they’re away.

In the UK, galleries are mainly commercial buildings surrounded by businesses (just like ours). This lack of personal connection dictates the relationship we often have with our neighbours, which is mainly fleeting, and based on our terms (the themed programmes we set; the times of workshops we want to programme). While in Indonesia, Louise and I made a commitment to get to know our local Birmingham China Town neighbours better, to find out what’s important to them, what they need, and rethink the contribution BOM can make to the local community. 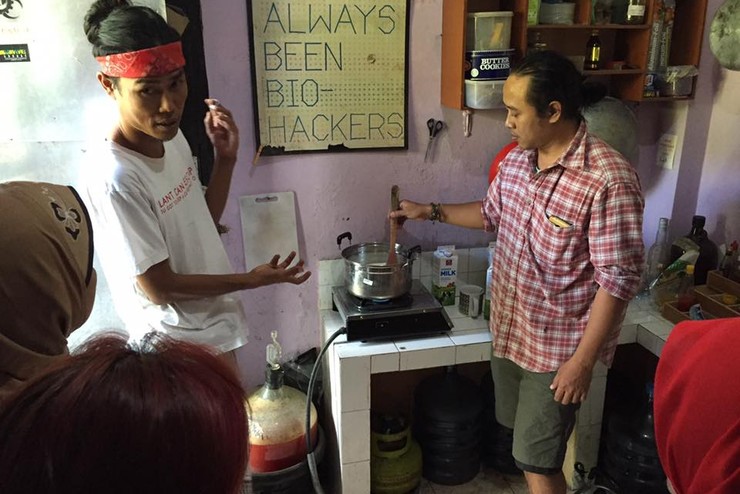 Practice can be radically experimental and hugely accessible

We fear too much talking about experimental things. We assume that audiences won’t get it. In actuality, it’s often people ‘at the top’ who have difficulty understanding what we do. At BOM we have big glazed windows, and most people are just passing by and come in out of curiosity over what they see through the window. We have the best, most inspiring conversations with people on these terms, and they get it. They get seeing artists’ ideas in development, they enjoy having a conversation rather than being told what something is. There was a beautiful moment standing next to Lifepatch’s fridge bearing a “WARNING – ECOLI” sticker and a group of local mums stood around the cooker with Lifepatch’s Dholly demonstrating the art of engineering live cultured yoghurt. A poster above them bore the slogan “we have always been bio-hackers”.

There was another workshop along a poor river community, where small children (who had the free rein of the entire village) peered attentively through the windows for a whole hour while their mums quizzed Dholly on the potential health hacks of fermented tea.

Lifepatch have crafted a beautiful practice with local audiences, creating the kind of engagement that most arts organisations and hackspaces dream of. We asked the women what other kinds of workshops they’d be interested in. Their responses: sexual health, gender and equality. We need to not be fearful of being experimental. We need to stop worrying that we’re not paying too much attention to the art rule book. 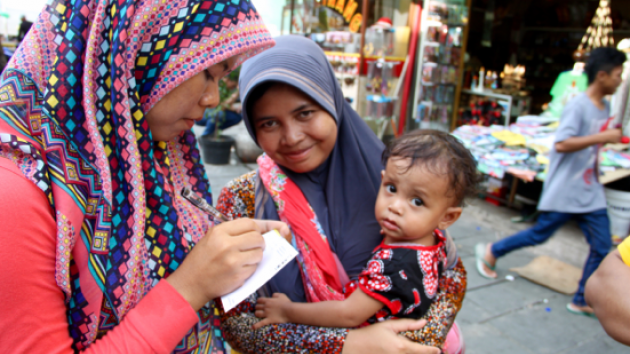 We definitely witnessed a freedom in school-aged children in Indonesia that we don’t have here in the UK. OK, so some of this is associated with poverty, like in Jakarta where the local street children run free (they also joined us as discerning audiences at Jakarta Digital Design Weekend), and by the river community, where children followed us along a tour of the riverbank. This freedom is accompanied by a strong sense of curiosity, and boundless fun. Using a concrete ramp in torrential rain as a waterslide; cheekily jumping out to frighten us strangers and shrieking with laughter as they ran away; going in and out of Lifepatch’s house and messing with their beloved electronics; staying to join in with their mums workshop, when they had the run of the whole village.

We perceive the UK as a very risky place for children. While writing this, I’ve received a text from my children’s school about a potential abduction, warning parents to be aware. This terrifying kind of text comes through fairly regularly. I worry about what the loss of freedom to run and explore means for my children. I want them to be curious, adventurous people with a thirst for exploring the world.

At BOM we’re about to work with a brilliant school network for children unable to cope in mainstream education. BOM is a treasure trove of hacked ‘stuff’ with endless possibilities. How can we support these children to have risky, mind-blowing experiences that put them onto a new path? We know that risk and freedom is an important part of that journey, and we know that we need to be better at allowing real curiosity to seep out, even if that is disruptive. 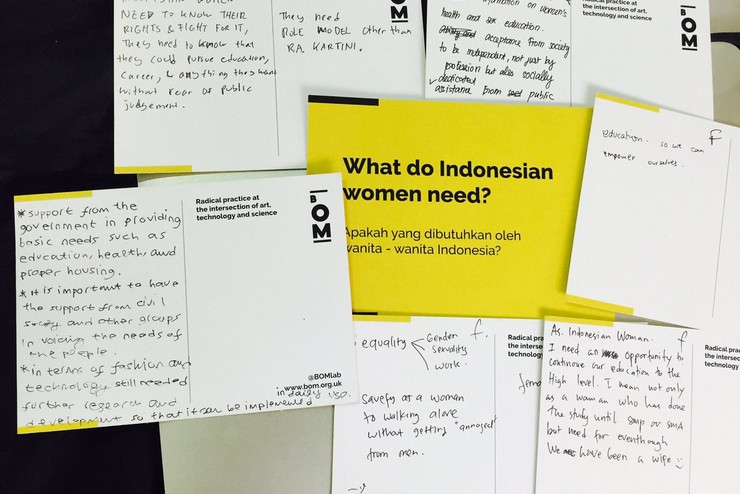 We learned a million other things too. Life is better on Indonesian time. I’m more relaxed, more considerate, a better person. I took time to make ovenfulls of gingerbread with my kids this Christmas, to stop and say ‘thank you’ to the teachers who were run ragged with them last term. I appreciate the NHS so much more since returning. I had an operation I would likely never have had if I’d been one of the many women I met, without access to healthcare. We should all be made to have a dose of Indonesian culture from time to time.

Louise and I are so excited about the next phase of this collaboration. First up, we’re hosting a residency with Mara and Sita, two young producers working with Lifepatch, here at BOM. We’ll be embedding them into the BOM community and making forays up and down the country to introduce them to some artists working at the top of their game, plus some incredible emerging practitioners. We’ll be looking together at the new kinds of virtual and physical programmes we can create between Lifepatch and BOM over the next five years, and the new opportunities we can create for artists. We’d love to connect this work with other female-led practices in art and tech across East Asia and the UK. Lifepatch is also expanding, so we’re looking to re-imagine our hub spaces and see what we can learn from each other, and our neighbours, throughout this process. There are a lot of ideas, and we can’t wait to get started.

As part of our ongoing collaboration with Birmingham Open Media, we are currently inviting a UK-based practitioner to undertake a one-month residency with Lifepatch in Jogyakarta, Indonesia during February or March 2018.

I’m privileged to be an Arab female entrepreneur

Reem Hameed, Founder of UAE content creation company Collective, and one of the winners of this year's YCE Multimedia/Film Awards, tells us about how she came to start her company, and her ambitions for the UAE film industry.

UK-Indonesia: Stepping in the Right Direction

The first meeting of the Joint Working Group for Creative Industries development between UK and Indonesia took place last week, building on the MoU between the two countries signed in November 2012.