Our Programme Manager for the Americas, Jonathan May, writes of his first Brazilian experience as he joined project partners Marshmallow Laser Feast, exploring the city and meeting our just announced participants With a population of near 20 million, São Paulo is as diverse a city as anywhere in the world

After six months at British Council as Arts Programme Manager for the Americas, I’ve finally made my first trip to Brazil on a recce with art/technology/design studio Marshmallow Laser Feast to begin our first AltCity residency in São Paulo.

Spending a week in the city with the MLF (or the Marshmallow Boys as they became affectionately known) was fascinating. MLF will spend two weeks in March, collaborating with a team of local artists to 3D map parts of the city and create a new artwork for the interactive façade of the gargantuan SESI gallery.

During this trip we formed the team of local artists we’ll work with, testing the capabilities of the building and venturing out to get to know the personality of the city. MLF wanted to search for locations of contrast—and São Paulo is a city full of them.

The writer Jorge Amado, when speaking of his nation’s potential, said Brazil was not a country but a continent. The diversity of cultures, religions and races within this giant of South America creates a landmass full of the most dazzling, and sometimes troubling, extremes; from unexplored wilderness to bustling cities, from the super-rich to the abjectly poor. And São Paulo, as Brazil’s largest city, is exemplar of the word contrast. But the other side of the coin is quite different. São Paulo is a helicopter city. As traffic mires the megalopolis in endless congestion—in 2009, Time magazine reported a traffic jam of 200 miles—the rich and successful take to the skies, flying from building to building, never having to touch the ground. No self-respecting tower block is built without a helipad, and it’s been estimated that there are some 400 licenced helicopters making 1,700 flights a day across the city.

MLF's In the Eyes of the Animals enables audiences to encounter England’s forests anew through an immersive 360º virtual reality experience, told by the inhabitants of the forest

Being in São Paulo means being surrounded by people. The size and scale of the city and the relentless roll of traffic—on the ground and in the air—can sometimes give a sense of being trapped inside a machine. It’s what’s at once exhausting and exhilarating about the city, and is inspiring our artists as we explore.

Barney Steel, co-founder of MLF, comes from a photography background, and it’s through the lens of photography that he thinks about 3D scanning. MLF are planning to use what’s known as a LiDAR scanner to capture 3D environments of parts of São Paulo; a surveying technology that maps topography using lasers to measure distance on a 3D plane. The data of these measurements are saved, and can then be used to represent, or augment in all kinds of ways. It’s the same technology MLF used to capture the woodland environments for their hugely successful VR experience, In The Eyes of the Animal. MLF want to use LiDAR to capture São Paulo, remix it, and wrap it around SESI’s gallery building. And in collaborating with a team of local artists, uncover some of the contrasting stories and states of the city. 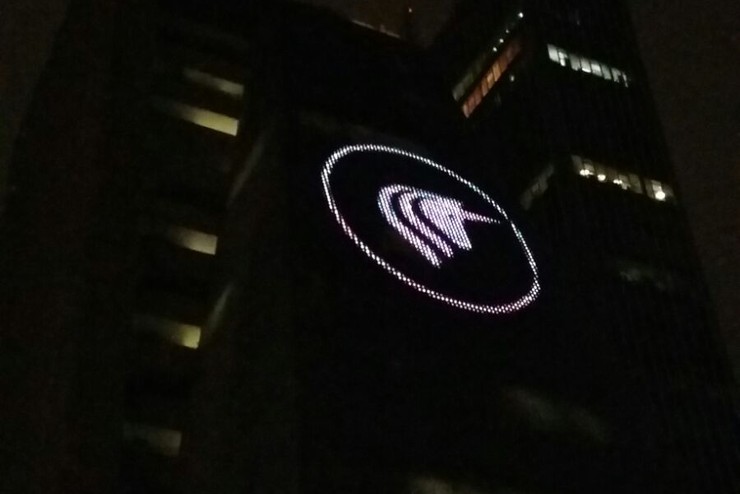 Talking to Barney over lunch, he describes how LiDAR and other such data image-capture technology documents humans every day; from security surveillance to science and surveying. He describes it as “the way the city of the 21st century sees us every day,” we just don’t realise it. He reminds me of artist Trevor Paglen’s writing on photography and ‘seeing machines’ –where Paglen thinks of photography not only as how humans use image capture-machines to observe ourselves, but how we use machines of data capture to ‘see’ us and our behaviour. From the roving cameras of Google Street view, to airport security backscatter imaging, to QR code readers at supermarket checkouts; data is the raw material of our information age, and like pioneering creatives throughout history, MLF use the raw material of our time to make their work. And like all great artists, it’s not just the material MLF are interested in, it’s the people and the stories.

The people of São Paulo are as diverse and fascinating as any multi-cultural city I’ve been to. Meeting our AltCity participants for the first time, we’re thrilled, challenged and inspired by the faces and talents around the table. As MLF present the VR worlds they’ve created with LiDAR scanning in the past, one immaculately dressed and modest looking fashion student asks if they were inspired by DMT experiences. This makes the Marshmallow Boys chuckle, and I wonder if it’s far from the truth. She then talks with us avidly afterwards keen to discuss her hobby enthusiasm for DMT tea. From architects to VJs, skateboarders to poets, our 15 local artists taking part in the workshop range as much in age, background and ethnicity as they do in their interests. Two things they certainly all have in common is their passion for unlocking the stories of their city, and a keen desire to explore creative uses of technology to do this. Together with MLF, meeting a group of São Paulo artists at the SESI-SI gallery

And they are not alone in this. To pull this project together I’ve been collaborating with an expert team; from the creative minds of Luciana de Almeida Paulillo and Alexandra Salomao Miamoto at SESI, to Effie Vourakis and our own immensely talented British Council team in Sao Paulo. As we watch MLF and the first cohort of AltCity participating artists meet one another for the first time, it’s hugely exciting to see the months of planning, research and hard work coming alive in a glorious collision of debate and laughter.

As I prepare to leave São Paulo I have mixed impressions due to the contradictory nature of the city. The size and scale is relentless—a sprawling, multi-layered metropolis of concrete, underpasses, traffic and high-rises. However, at the height of summer it seems to be in a constant state of entropy, as vines, trees and plants burst out of the urban topography, fighting to reclaim São Paulo in the tropic heat. I glimpsed families huddled amongst cardboard and smog in motorway underpasses, but then overhead the traffic of elites in their conspicuous helli-travel.

São Paulo truly is a city of extreme contrast, and though from the outside it can seem terrifying, in the same way smog seems to disappear when you’re within it, so it is that once you commit to this monster of a city, it rewards you with a kind of stickily protective embrace. And of course like all places, it’s the people who unlock it and make it humane. As we embark on Marshmallow Laser Feast’s AltCity residency with an fantastic team of creatives, I’m excited to see how they use technology to reimagine the stories, spaces and senses of São Paulo.

AltCity São Paulo has been a collaboration between British Council and Marshmallow Laser Feast, supported by SESI-SI Digital Art Gallery. Exactly two months before we open our artwork on the facade of the massive SESI gallery building, Americas Programme Manager Jonathan May takes us inside of our new Art Technology Lab AltCity São Paulo as we explore the megalopolis of Brazil.

We’re excited to announce the development of a new digital arts residency project in Brazil in partnership with the fantastic London-based Marshmallow Laser Feast.