How do Lagosians see their city? How can we imagine and create better urban futures? We took to the streets of Lagos to come up with the theme of our latest Playable City.

It's Africa’s largest and the world’s third fastest growing city.  Lagos is a fast-paced, constantly changing urban space. It is also a complex space with a troubled history of planning and development practices which have resulted in a portfolio of urban ills and an uncertain future.

One way to shape that future is to imagine, today, what a more liveable, open Lagos might look like.

Playable City presents an alternative approach to how we think, make and engage in cities around the world. By transforming city spaces into places of unexpected interaction, Playable City encourages engagement with one’s environment and fellow citizens, fostering questions, creation and interventions.

Bristol, Recife and Tokyo have already been given the Playable City treatment.  Understanding local communities, cultures and definitions of ‘play’ is the essential starting point for exploring how play can be used to reimagine the city: How do Lagosians play? How do people already engage with each other and their environment? What are the important issues in the city? What kind of projects will have a lasting impact?

Future Lagos and Nsibidi Institute worked with the British Council on a research project exploring urban issues, experiences and inclinations in Lagos. Their methodology encompassed desk research, ‘vox-pop’ style video interviews (above), workshops and surveys.  Housing, power, waste, pollution and climate change, unemployment and citizen ownership were all considered, but eventually transport emerged as the top issue on the tip of most Lagosian tongues. 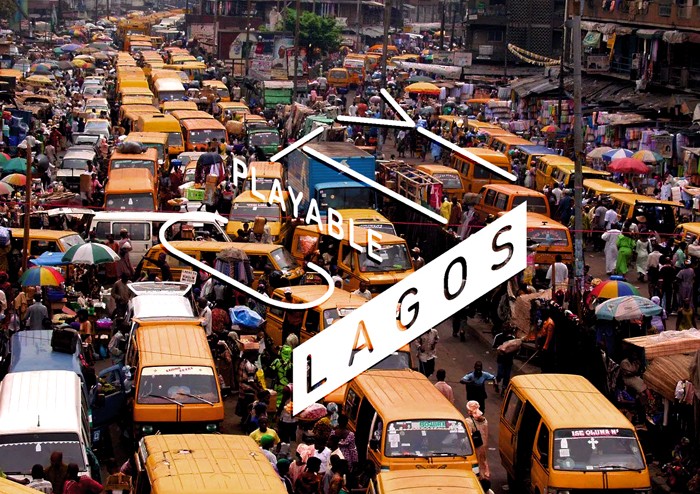 Transport is a topic that every Lagosian will have an opinion on. Mobility affects everyone from the informal trader to the uber rich businessman, from the young schoolboy to the retired grandparent. Historically, transport in Lagos was water based. When bridges were built connecting Lagos Island, Victoria Island and the mainland, road-based transport became the preferred choice and the city has not looked back. The train and tram service, once the preferred mass transit option to move around the city, has suffered neglect. The car has taken over, with limited options for public transport.  Without a change in mindset and infrastructure, congestion and pollution will continue to plague the city of Lagos.

Most Lagosians interviewed on the streets got around town using danfos, the yellow mini-bus as ubiquitous as New York’s cabs, although perhaps not considered as safe, easy or reliable.  But even for those who use private cars, transportation is a daily lived experience, affecting mobility and behaviour.  Playable City will be bringing artists and creative thinkers from the UK and Nigeria together to develop interactive installations that respond playfully to the challenge of navigating through Lagos.

Playable City Lagos is produced by the British Council and Watershed, supported by Goethe-Institut, Future Lagos and CcHub.

Playable City Lagos set out with a very clear purpose to create open, independent dialogue with real agency in Africa's biggest city. A new report tells the story of this unique project.

Giving Lagos something to talk about

We chat to Playable City Lagos participant, Desiree Craig, as she shares the story behind DanFone, a playful intervention connecting strangers across the bus networks of Lagos

Our Programme Manager for Sub-Saharan Africa and Europe, Lynsey Smith, writes of her first week's experience, sharing insights into the urban challenges and cultural opportunities for playability in Africa’s largest city

"A Process of Cultural Acupuncture"

We're looking for an evaluator to evaluate the immediate outcomes of the project Playable City: Lagos in March 2016. This is an fantastic opportunity to be part of an exciting project in a dynamic context.