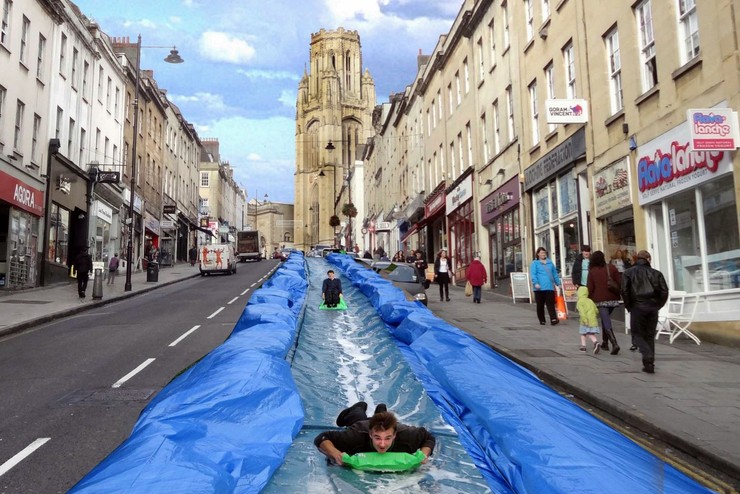 You’re probably not surprised the term ‘Playable City’ was coined in Bristol - how appropriate you might say - how Watershed…  It resonates with a particular moment and a particular ethos in a particular city - its history of creative regeneration, connecting diverse communities and a permissive culture - all within a wider landscape - the peculiar British humour and love of slapdash subversion, coupled with our fear of increasing social isolation and anything too slick or efficient... But there are, of course, plenty of cities around the world using playful ways to have fun, connect with each other and reimagine city life and here are a few examples...

The Sydney Harbour Bridge Picnic where 6000 people gathered to enjoy breakfast on what's usually 8 lanes of motorway; the Utrecht travel accelerator or slide, designed to encourage people to use public transport (although it wasn’t massively popular as residents didn’t want to 'get fat'; the Stockholm Street Piano was more effective, delighting commuters as each step climbed played a musical note; and Fast Track in Russia allows you to bounce your way to work.

The Moving Forest in Amsterdam saw 100 trees planted in shopping trollies popping up in unexpected places inspired by a slightly terrifying children’s story of a forest where those trapped in it can never escape. Part of Scott Burnham’s Urban Play project - definitely worth looking at his work.

A Colombian Mayor introduced traffic mimes to congested Bogota to ridicule those who drove badly because he thought Colombians were more afraid of being mocked than fined. Nuage Vert, an installation in Denmark, uses laser tracking to emit a green cloud whose size and shape changes to reflect the electrical consumption of local residents.

Amphibious Architecture - floating interactive tubes in New York waterways allow you to text-message the fish and receive real-time information about river life. A reminder that cities are not only inhabited by humans (or lampposts!) But you could argue that many of these cities look quite similar.  How might the Playable City concept be understood in places with very   different infrastructure, food, weather and politics?

The great thing about my work is that I have access to all the cultural intelligence of my global network and colleagues - I was intrigued to know how some of them would respond to it. What about cities that require careful planning, negotiation, tenacity and endurance just to move around. Where the car is more essential and aspirational because of the lack of alternatives? Where it’s so hot that people don’t want to be outside if they can help it? Where social life is moving from the street to the shopping mall? However, we might also see unexpected delightful disorder and resourcefulness - long traditions and visible spectacles of play that constantly contest these challenges and define local identity.

Every city is of course a more specific and complex case than can be captured here - but we should remember that play doesn’t mean the same for all of us - it’s dynamic and changing. And I think this makes the playable city idea, itself emergent, even more interesting - and relevant. The rapid growth of urban populations - apparently doubling by 2050 - is matched by a global awareness of the power of culture, good design and local experimental responses for a variety of reasons - from local politicians keen to distinguish their city or ’nudge' behaviour change as well as movements of people finding more inventive and open ways to disrupt old systems and build something together. 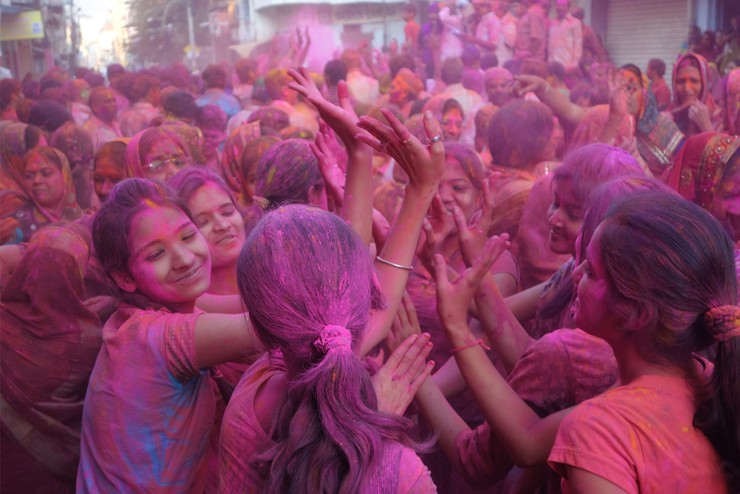 Two years ago, an entrepreneurial Brazilian called Chico Saboya came to visit us in the UK. He runs Porto Digital, the biggest digital cluster in South America, responsible for bringing huge economic growth to North East Brazil. But these hundreds of tech start ups are still somewhat disconnected from their surroundings - the country’s largest number of favelas and serious problems with public services and public space. Now Brazil undoubtedly has a playful culture - and many examples of leading urban and social reforms, typified by Jamie Lerner, the architect politician who transformed the city of Carutha in the 70s. Anyway, Chico was struck by Watershed’s work on Playable City. Supported by the British Council, Arts Council, and others, it was co-produced and reimagined in Recife. Many exceptional people worked on this from UK and Brazil - artists, producers, designers - which included a two week lab trialling new ideas (for citizens to connect and play). The programme really took hold in the local imagination with lots of spin-off volunteer projects and support from local government and media. Here’s just a couple of the resulting projects:

Aquatic Pathways explored how the waterways of Recife could be used instead of the congested roads. Using Google Maps it asked residents to select the best pick up spots as well as creating interactive lighting on the boats to make them more visible and lovely (no peeing as far as I know Paolo! Press Play or 'Toca Ai' designed hands on city walls that trigger sounds as people touch them - with the aim of linking strangers through spontaneous improvisation. But for many, the most important thing about this project was the participation, exchange of ideas and generally excellent time had by all. This wasn’t always straightforward - some of the Brazilian partners were motivated primarily by finding results to address local problems while most of the participants were interested in learning from the experimental process rather than any specific implementation. However, that potential impasse actually created a positive friction, requiring both sides to open up and learn more from the other perspective.

I think this is why the Playable City can be a powerful idea - rich, accessible and full of possibility for people from diverse disciplines and different backgrounds. It’s not just about physical space for play, it’s about the freedom to question cultural boundaries and social change. We’re still in the process of articulating this emergent concept - and that allows us to think about what future we want together. As urban growth increases, we need inventive, surprising ideas from everywhere.

An exhibition about culture in flux, told through sixteen stories of people reinventing creative exploration and participation. Discover a navigation scheme for the Russian state library, drone shadow handbooks, hacked musical instruments and a heartfelt letter to Scotland... 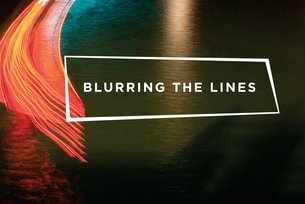 Playable City Tokyo: people and play at the heart

‘The Playful Welcome’ took place in December 2016. It brought together 11 practitioners from the UK and Japan, to extend the reach and breadth of Playable City.

We're looking for an evaluator to evaluate the immediate outcomes of the project Playable City: Lagos in March 2016. This is an fantastic opportunity to be part of an exciting project in a dynamic context.

Following the international success of Hello Lamppost (winner 2013) and Shadowing (winner 2014), the Playable City Award returns for its third year.