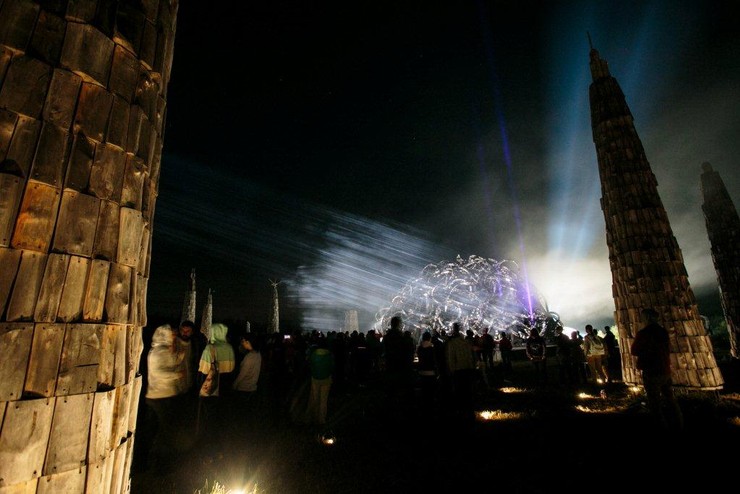 'Universal Mind', Nikolay Polissky's sculpture, is also the main stage for the festival.

In preparation for our FutureEverything Moscow programme (November, 2014), we worked with the FutureEverything team and Russia’s largest sculpture Park, Nikola-Lenivets, to host a second Culture Shift/Art Lab (Digital Emulsion) in May, 2014, to support the generation of ideas and installation projects for the Park’s annual digital arts’ festival.

Nikola-Lenivets
Located 200km away from Moscow in the Kaluga region (one of Russia’s leading cultural, education and scientific hubs), Nikola-Lenivets is a one of a kind experiment. Partly a village and partly an open air artistic project inside the UNESCO-listed biosphere reserve of Ugra National Park, it aims to ‘create a natural self-regulated environment for life, recreation, art and work in harmony for nature’ through an incredible infrastructure which hosts residences, workshops and is home to a series of landscape installations - predominantly the work of Nikolay Polissky, Russia’s ‘only land-artist’.

Together with Nikolay’s son, Ivan, FutureEverything’s Tom Higham and Elliot Woods and Mimi Son from Kimchi+Chips, we produced a lab to provide a space for creative ideas' generation through rapid prototyping, creative experimentation and low risk play. The programme focused on the use of vvvv and custom-built digital emulsion shaders, and a winning team received further support to install and perform their piece at New Media Night, Nikola-Lenivets’ annual celebration of digital art (4-6 July 2014). 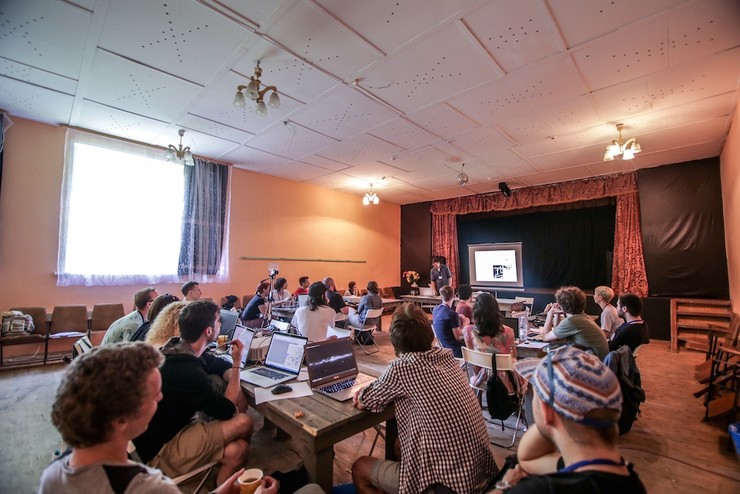 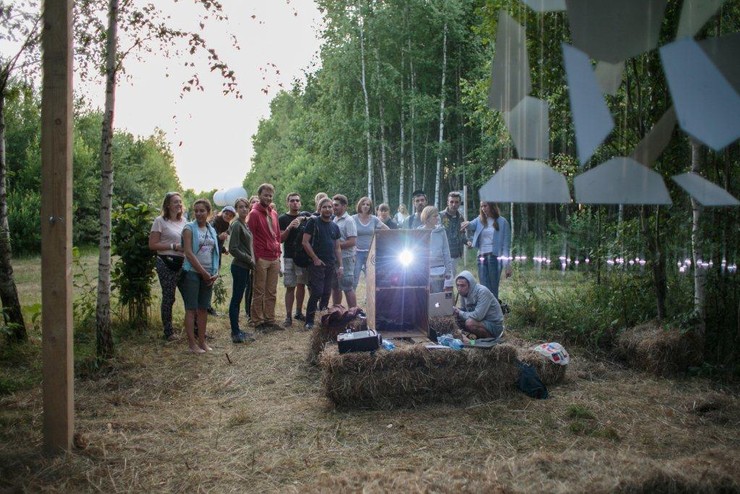 'Hidden', the workshops' winning proposal, is inspired by the principle of anamorphosis. 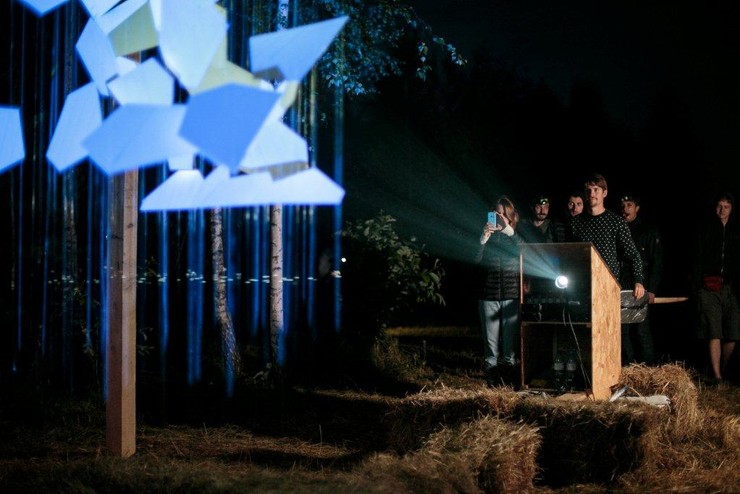 The winning commission
Hidden, the workshops' winning proposal , is based on the principle of anamorphosis (i.e. when abstract forms shape into recognisable images due to perspective distortion). Viewers interact with the object by searching for the right angle to look at it, so that distinct pieces of the installation become one.

The installation is dedicated to 'Nikola-Lenivets' lost objects'. Following Maslenitsa traditions, a Russian/Eastern Slavic spring celebration, the park organisers burn art objects specially created for the celebration. The creators of Hidden wanted to remind viewers of those burnt artworks by projecting images of fire together with archive videos from previous Maslenitsa celebrations at Nikola-Lenivets.

Video 'fragments' floated in the night, creating whole images when looked at from the right angle, and helped illuminate the visitor's path in between two of the main New Media Night's installations (Brodskiy’s Rotunda and Bernaskoni’s Arch).

The whole project was directed by Gia Dzhahaaa and Vladislav Nakoryakov from the ATTRACTOR team, and by Theory and Practice's editor Furkat Palvanadze. 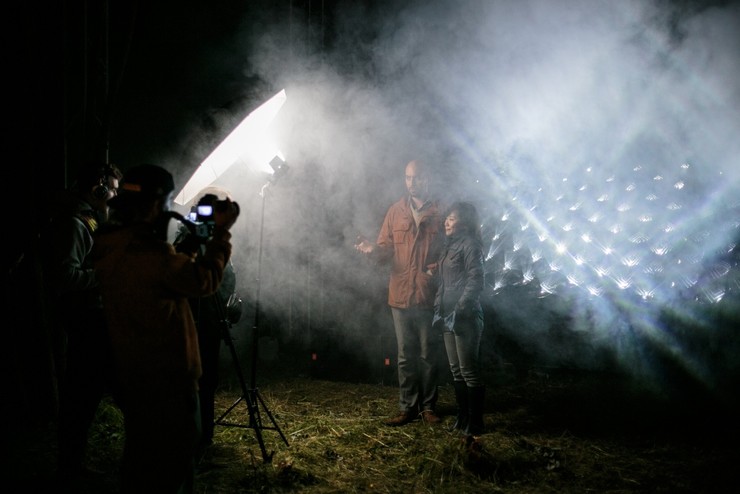 Elliot Woods and Mimi Son from Kimchi and Chips, in front of 'Light Barrier'.

Kimchi+Chips’ Light Barrier
As experts in vvvv and digital light exploration, we also commissioned Elliot and Mimi to develop a piece for the festival. Light Barrier (2014) combines dozens of convex mirrors, scanning and projection technology to create phantoms of light in the air. The piece creates floating graphic objects which animate through space as they do through time - and the effect is mesmerizing. Read more about the piece and their creators here. 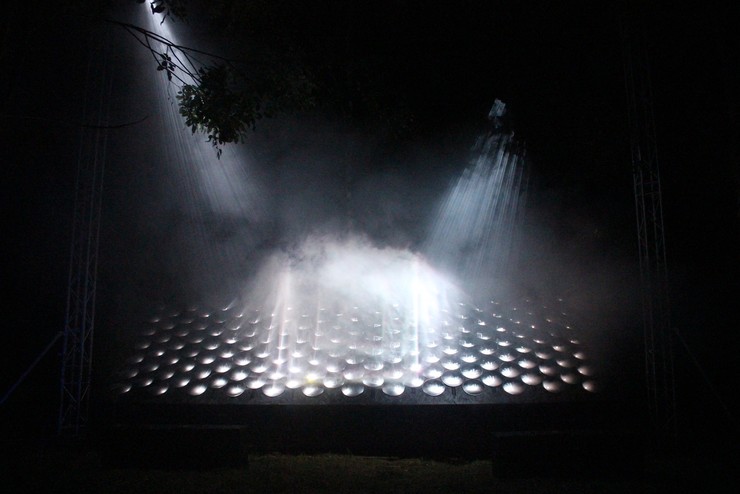 Kimchi and Chips' Light Barrier at the opening night of the Nikola Lenivets' festival. 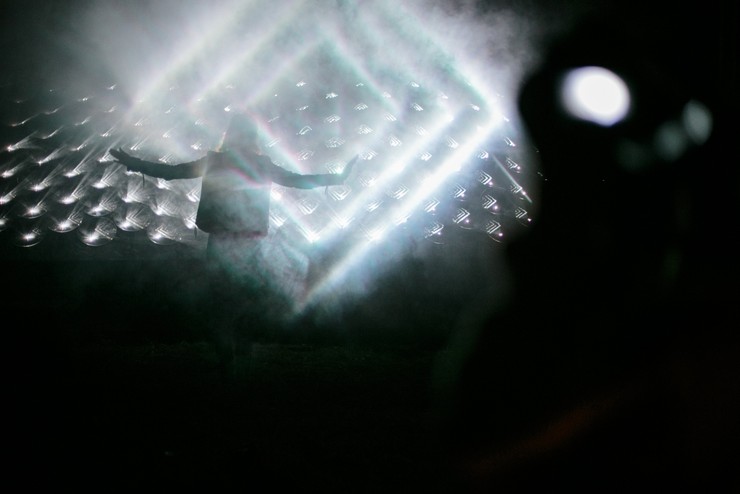 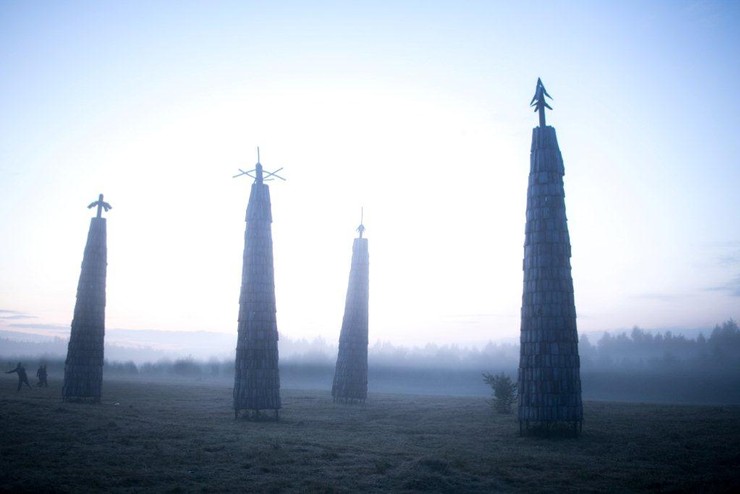 The festival goes on from midnight until dawn.