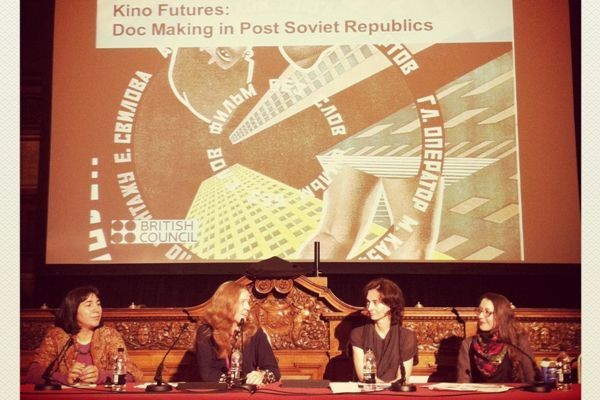 'It’s a shame, but until this year not once in the nineteen-year existence of theSheffield International Doc Fest has there been a visit by a delegate from Ukraine. Sheffield Doc Fest ranks as one of the most prestigious documentary festivals in the world. It offers outstanding opportunities to meet internationally acclaimed producers and distributors, attend master-classes with notable speakers like Nick Fraser, and watch a brilliant, international programme that serves as a further reminder of the battle that is life on earth. And as an ongoing battle, it signals no lack of material for documentary film-makers.

Historical Justice
It fell to me to represent Ukraine in the seminar KinoFutures: Doc Making in Post Soviet Countries, organised by the British Council’s Creative and Cultural Economy team. Together with some fellow Cultural Leadership International 2011 participants (colleaguesNino Ordzonekidze from Georgia andMariam Okhanyan from Armenia), we gave the British audience a quick overview of the history of documentary film in our respective nations. Our countries and cinema represented something of the exotic, and the crowd gave us its full attention as we looked at the work of Sergei Parajanov, a film-maker born in Georgia to Armenian parents, but who lived and worked in Ukraine. In fact, our countries’ separate cinematic histories share several common themes. In each country, the emergence and blossoming of documentary film was interrupted during Stalin’s regime, later revived during Khruschev’s thaw, and now, each in its own way faces new and unrelenting challenges.

In the Sheffield Festival’s catalogue under the heading “Retrospective”,I discovered Dzyga Vertov’s work, noting that his entire filmography had been designated as ‘Russian’. I vented my indignation into the microphone, and explained that Vertov’s most significant and productive period – towards the end of the 1920s, when the avant-garde was under full attack in Moscow – occurred while he worked in Ukraine. A prime example is the radically conceptual,Man With a Movie Camera, backed by the Odessa Film Studios “VUFKU”. The film, shot entirely in the Ukrainian cities of Odessa, Kharkiv, and Kyiv, serves as a chronicle of a single day in the life of the city, and features the film camera, the “Cinema Eye”.The film is rightly Ukrainian because of its experimental spirit, its geographical realties, and its financing. During that same period, Moscow studios were engaged exclusively in the production of propaganda film.

Having corrected the historical record, we were now ready for questions from the floor.

Q - “Is it true that Russia currently finances film production in your countries?” asked a female student in spectacles.

ME – “We’re currently in an informational war with Russia.”

MARIAM – “We wouldn’t oppose Russian financing, but there hasn’t been any. None.”

Q – A tall, slender Englishman happily offered: “I’d like to make a film about how people are disappearing in Russia. What themes currently interest you?”

MARIAM – (answering for the group) “We’re more interested in the lives of average people. Our day to day is certainly fascinating, and terribly complex. We’re bored by the kind of scandal that western European film festivals seem to expect from our countries. Our life is so much larger than that. Today, what we need are stories of triumph of the common people in our neighbourhoods, new heroes who fight for our rights without compromising their human dignity.”

Nino and I nodded our heads in agreement. It couldn’t have been said any better. 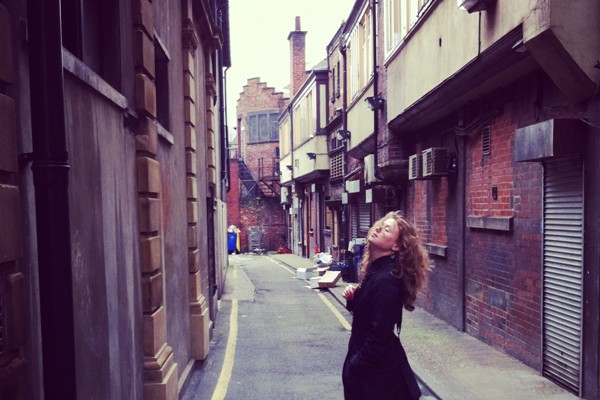 The Sheffield Festival awards jury prizes to films in the categories of "Special Jury", "Innovation", "Green", and "Youth." A separate prize is awarded for the “Best Student Film”, which garners the close attention of experienced film directors, producers, and distributors on the lookout for outstanding new talent. And finally, the public and delegates choose the “Audience” award winner from among all the films presented.

The programme, with more than 140 films, is organized in such a way that even if you only manage to see a dozen films or so, you would still walk out of the festival transformed into a different person. Sheffield presents films that challenge and change you.

Among the best films competing for the “Green” prize this year was Aluna, from British director, Alan Ereira. More than twenty years ago, he shot a film about the Kogi tribe living in the remote Sierra Nevada de Santa Marta in Colombia. At that time, the tribe requested that the filmmaker deliver a message to humanity: We are destroying the earth. The selling of forests, the extraction of oil and coal, the despoiling of the surrounding environment had to stop or the planet would become uninhabitable. The Kogi believed that they were themselves assigned as the caretakers of the world. Through communication with “Aluna” - a kind of cosmic consciousness - they maintain the natural functioning of the earth. When the tribal prophecies began to come true, Ereira returned to the mountains. The saddened, fearful Indians told him, “it falls to you, little brother, to intercede for us with mankind.” And together, with Ereira as their guide, they set off on a journey through modern-day Colombia in an effort to save the planet.

The lights come up in the hall and the tribal leaders – called “Mothers” – take to the stage. The crowd is deeply affected and offers a standing ovation. The Mothers, a meter sixty centimetres tall, are dressed in white mantles and cone-shaped caps that recall the roofs of their traditional homes. A hand goes up in the hall:“Tell us, most esteemed mother, how are we to live?” The chief’s answer is brief and stern: “First, little brother, you must grasp the message the earth is telling us.”

Among the European films on offer at the festival were selections from the Docudays UA festival. Three years ago,Bananas, a film by Swedish documentarian Fredrik Gertten, competed at our festival. The story revolves around the world’s largest fruit corporation, Dole, and how it had been poisoning its labour force. A small American legal firm successfully sued the corporation on behalf of the workers who, while working at a Nicaraguan plantation, had been rendered sterile from exposure to pesticides. The story would have, perhaps, ended happily at that point had Dole not decided to go after the film’s director, waging a vicious negative PR campaign, and pursuing legal solutions which included threatening the seizure of the documentarian’s property and the bankruptcy of his studio. What’s a director to do in such a situation? Start filming! And thus,Big Boys Gone Bananas! comes to the screen.

This time, Gettern himself is the star. Rallying to his defence are journalists, ordinary citizens, the owners of a candy company that refuses to buy fruit from Dole, and even the Swedish Parliament, which regarded Dole’s “hit” on the documentarian as an attack on free speech, a sacred matter in Sweden. 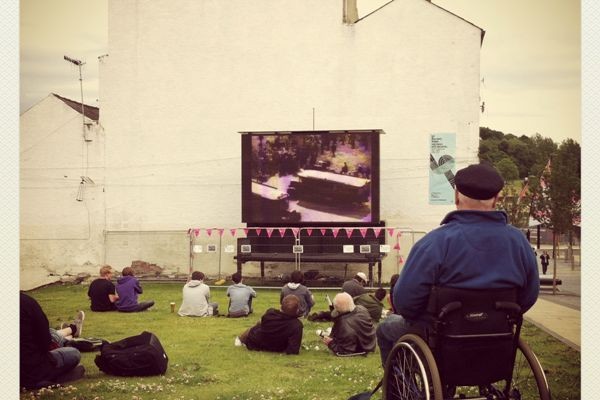 From my perspective, the feel-good film of the festival had to be The Punk Syndrome from Finnish director, Jukka Kärkkäinen, which concerns a punk band made up of four boys, each coping with a psychological or physical disability. Finding in punk music a medium for self expression, they become a sensation in their own country Throughout the film, the band’s packed performances and concert triumphs are juxtaposed with scenes from their everyday existence. This compassionate look into the life of the quartet reveals a courageous, talented group of young men, childlike in their sincerity and openness, and endowed with a brilliant sense of humour.“I saw them and fell in love!” the director told us after the screening. And the punks, moved by the occasion, began to hug everyone in the hall. Hugged to my heart’s content, I invited them to visit us at Docudays UA, and they promised to include us on their tour schedule.

Something about Us and about Ukraine
With nearly 2,000 delegates in attendance, including novice filmmakers and accomplished artists and producers alike, the festival overwhelms Sheffield, transforming it from a quiet, provincial city into a true heavyweight of the independent documentary scene. Various activites occupy fifteen locations in the city centre - from workshops in the city hall led by luminaries of the international documentary scene to pitch-sessions held in a local chapel. And every cinema in the Sheffield city centre is showing documentaries. Those films which can’t be accommodated in the cinemas run at the library and the theatre. Even with ticket prices on the door at £8, (in Kiev, an outrageous price for a documentary!), every hall is filled, and free screenings are also held at outdoor locations. “Meetmarket”, a kind of ‘stress free’ one-on-one pitch session, is held in a conference room that includes a bar, with an estimated 1,300 meetings taking place over two days. Organizers claim that 70% of the projects represented at the “Meetmarket” receive their funding from Europe or the United States. During the lunch break, producers, distributors and documentarians move from table to table carrying their lunches with them so as not to lose any time or miss lunch!

One influential Finnish film producer asks me:“Why are we seeing so few films and projects out of Ukraine? The current historical process there right now is fascinating. The country is just filled with events, filled with themes and characters, and you’re not even attempting to tell us this story…about Ukraine. Thematically, Europe is running out of stories. But your post-soviet space presents an enormous field for investigation and in which the dialogue is yet ongoing, even as it’s been exhausted, sad to say, in contemporary Europe. Tell the Ukrainian documentarians to get active and not blow this outstanding opportunity to tell about yourselves and about Ukraine.”

I promised I would. And now you’ve been told.

PS: You can catch the hits from the Sheffield Festival at the 10th annual Docudays UA festival, running from 22-28 March, 2013 in Kiev.'

We are supporting Sheffield DocFest 2019's Alternate Realities commission. This is an incredible opportunity for creatives working in immersive tech to create an imaginative digital artwork.

We're spotlighting some of the hubs taking part in the European Creative Hubs Forum in Lisbon. Find out about Ukraine-based Izolyatsia and who's in their network in 'Cool Kiev'.